How to Use Hostinger’s DNS Zone Editor in 2021 If you’re using Hostinger service, chances are, you have come across the DNS Zone Editor in your hPanel. But what is it and what does it do? This article will answer your questions and teach you how to use it, so keep on reading!

What is DNS and DNS Zone Editor?

Simply put, DNS or Domain Name System is a system that translates domain names into IP addresses. When you enter an address, a request is sent to the domain’s name servers, and the servers will retrieve the IP address from its DNS record.

When you need to, DNS records can be created or modified using the control panel’s DNS Zone Editor. For instance, you need to edit those records when you want to switch web hosts or point your domain to another address.

Upon entering the Hostinger’s DNS Zone Editor, you can see that there are various DNS record types you can edit, add and remove. In this section, we will cover all the available ones in our system and how to modify them.

What is an A Record?

A Records are the most basic DNS Records that are used to point a domain or subdomain to an IP Address. However, A Records only point to IPv4 addresses.

Let’s take a look at some of the examples below:

You can see that there are two listings in our Hostinger’s DNS Zone Editor: ftp and naked (@) domain. These records will point ftp.example.com and example.com to an IP address of 156.67.222.198. If you want to point one domain or subdomain to various IP addresses, simply add an A Record entry with the same hostname but with a different IP address.

To create a new A Record, simply click Add New and fill the required fields:

After you input all the required information, hit Create to save the entry.

What is a CNAME Record?

CNAME, short for Canonical Name, is a commonly used DNS Record to make one particular domain as an alias for another domain. This makes it possible to have multiple addresses pointing to one IP address without having to create an A record for each domain.

Thanks to this system, if you ever need to change the IP address, simply edit the A record for avg.yourdomain.com and the aliases will follow suit.

Creating a CNAME record works similarly to making other records in the Hostinger’s DNS Zone Editor. The small differences are the values you put in the Host and Points to fields:

What is an MX Record?

Aside from Host and TTL, there are two other fields that you must enter when creating a new MX record:

What is a TXT Record?

A TXT record is a DNS entry that holds text information for sources outside of your domain.

Common examples of TXT records are Sender Policy Framework (SPF) and DomainKeys Identified Mail (DKIM). Both records are used to secure email exchanges from spoofing or phishing attempts. The first one works by specifying the IP addresses or hostnames that are permitted to send messages on behalf of a domain, while the latter authenticates emails by adding cryptographic signatures to messages.

By default, an SPF record is already created when you open the Hostinger’s DNS Zone Editor. It is identified by the v=spf1 tag within the TXT value.

If you want to create a new TXT record, click Add New and fill the required fields. However, the information will vary depending on the entry you want to make:

What is an AAAA Record or IPv6?

The AAAA record is quite similar to the A record we previously covered. But instead of pointing to an IPv4 address, it allows you to point your domain to an IPv6 one.

By default, this record is left blank in Hostinger’s DNS Zone editor since most internet service providers (ISPs) and internet routers haven’t supported IPv6 yet.

What is an NS Record (Name Servers)?

Name servers store authoritative DNS server records of a domain and are responsible for translating the user-friendly name to an IP address. There are at least two name servers for each domain, one serves as a backup when the other is down.

This is the record you need to edit when you want to switch web hosts. 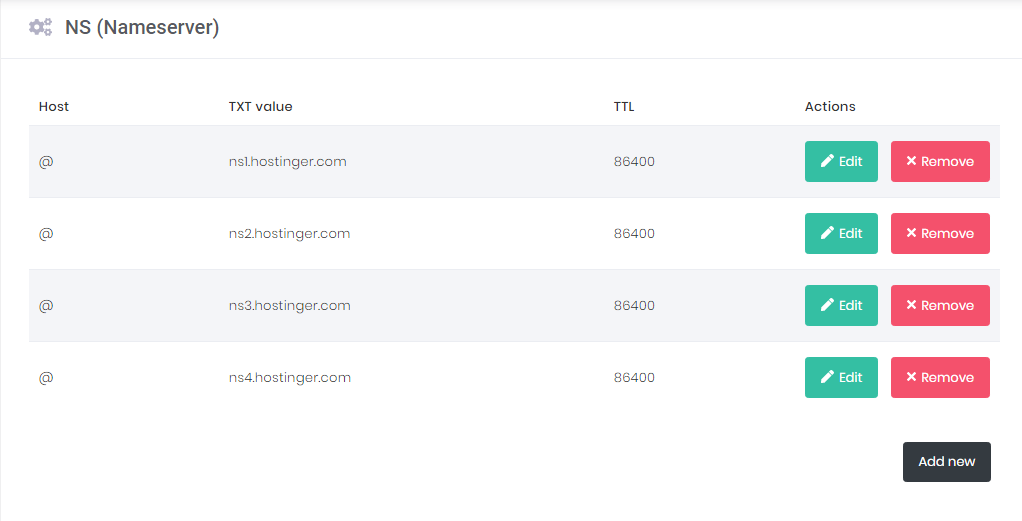 What is an SRV Record?

SRV is a record in the Domain Name System that specifies the server location of various services to establish a connection with them. Just like the AAAA record, this one is empty by default.

The required information for this record is similar to others, with some differences:

What is a CAA Record?

Certification Authority Authorization, as the name suggests, is a DNS record in charge of defining the certification authority (CA) that can issue SSL certificates for your domain.

The underlying information of this entry is similar to any other. However, instead of Point To, it has Content that consists of:

Sometimes, you may encounter an error when editing the DNS Zone. If you have no idea how to fix it, it is possible to revert the settings back in Hostinger’s DNS Zone Editor:

To recap once more, DNS is a system that translates domain names into its numerical IP counterparts.  The information about a particular domain name is stored in DNS records, which are editable via a DNS Zone Editor.

In this article, we have learned how to use Hostinger’s DNS Zone Editor as well as the DNS types that can be modified inside it. Hopefully, this guide will be helpful the next time you need to use the feature!

Linas started as a customer success agent and is now a full-stack PHP developer at Hostinger. He is passionate about making a positive impact on people by utilizing user-driven development techniques. As much as he enjoys coding and changing the world, he secretly dreams of becoming a rock star.

Hostinger Web Hosting Plans: How to Choose the Right One for You

Here at Hostinger, we have a large variety of web hosting plans to help you achieve success online. But we also understand that having many options ca ...

How to Create A Landing Page

Creating an effective landing page to increase conversion rates can be challenging —  especially if you’re not familiar with the best practices. ...

How to Run and Configure Cron Jobs on hPanel

Performing the same task on your site over and over again can not only become tiring, but time-consuming as well. That’s why in this tutorial, we’ ...

Hey there! To solve that problem you need to make sure you are pointing the domain to the correct nameservers! To find out how to point your domain to us, you can check this article here! :)

What i will put on my DNS?

Hey there Gwen. In your DNS you can connect your domain to other "features". For example, adding MX records will add an email service to your domain, if your MX records are matching with the records of your purchased email service.

Thank you for your suggestions

You are very welcome, Gwen.

Hello, Despite editing my MX and TXT records, my domain is still not getting verified.

Hey there. After you edit your DNS zone you need to give it up to 24 hours for the DNS propagation, before the changes are applied. Try again in 24 hours and it should be verified.

Hi, I have a domain registered at register.com, but those geniuses have managed to disable email for my family and are hard to reach. I would like to go with hostinger, but then I'll need to set the MX records at register to point to you? If so, to what servers or IPs?

Hey there. You can check the Hostinger MX records here.

Hey team, are there limitations around priority settings for MX records? If I needed to set the priority on a record to 0 is that possible? If not, why not?

Hi, Andrea! Yes, it is possible to set priority to 0 for MX record from your DNS zone.

How to Create FTP Accounts