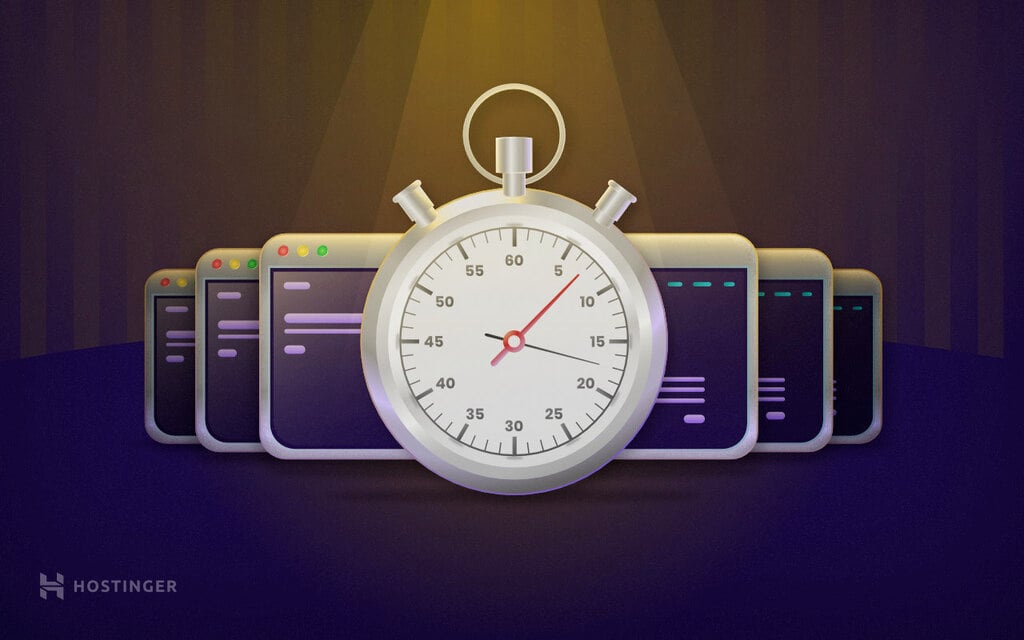 There are often ways to do things more efficiently. For example, handling repetitive tasks using an automated process is preferred by busy webmasters. If you use a Unix-like operating system, a cron job could save you time by performing tasks automatically.

In this article, we will explain the basics of a cron job and how to use it for scheduling tasks.

Save up to 77% today and check out Hostinger’s VPS Plans!

The Basics of a Cron Job

You can create and edit cron jobs using a few different methods. In this tutorial, we will show you how to do it using the Linux Shell Prompt (Terminal).

If you have a VPS at Hostinger, you can find the login credentials in your VPS management tab, and access your server through SSH. If you’re having trouble, check out our PuTTY SSH tutorial.

Here are some basic operations that cron jobs can perform:

If you want to edit a crontab file of the current user, type the following command in the terminal: 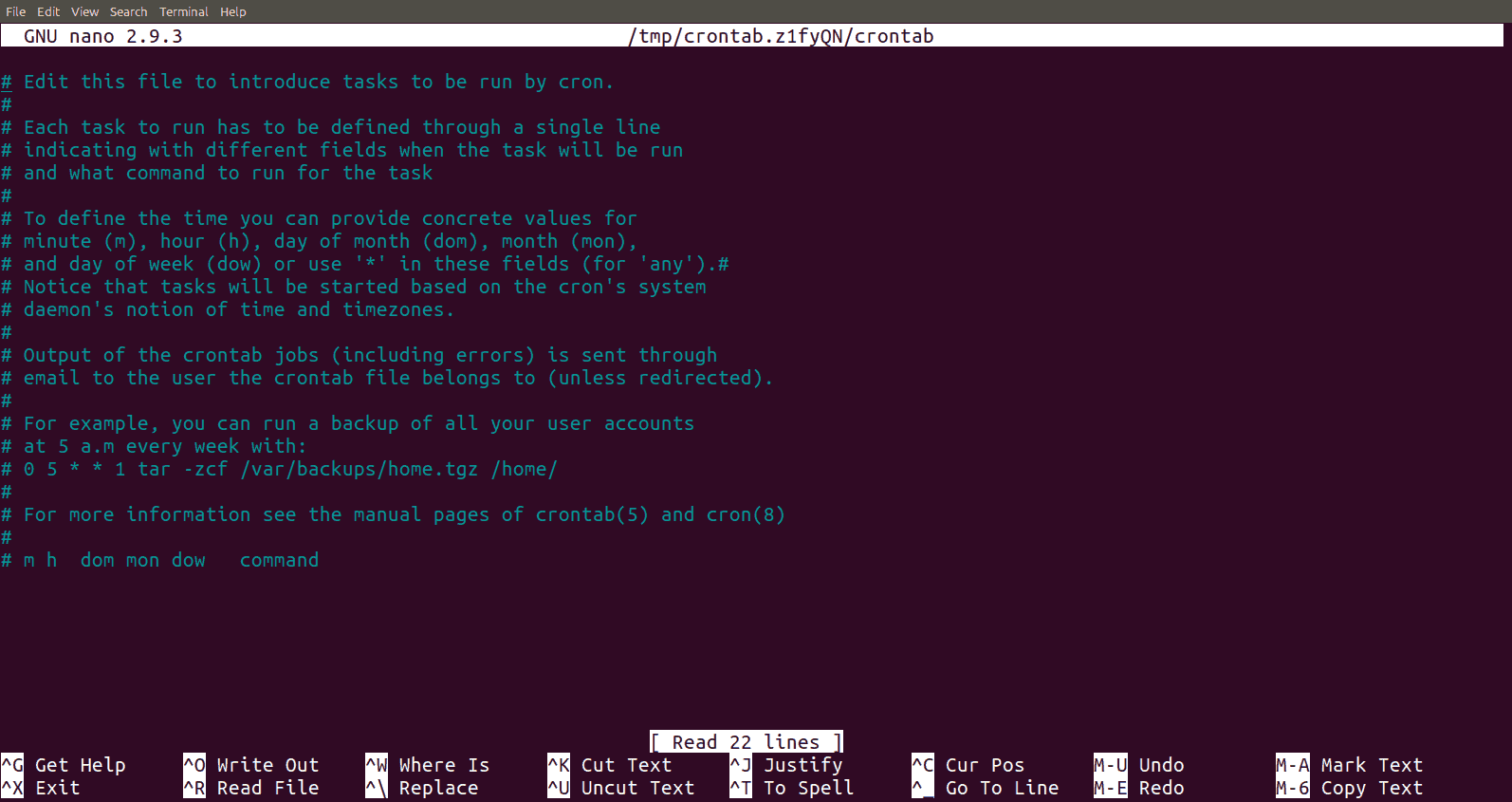 As it uses the vi editor, you can learn the basic vi commands to make sure you take the right action.

If you want to edit another user’s crontab, you can type crontab -u username -e. Keep in mind that you can only do this as a superuser, meaning that you need to type: sudo su before the command.

If you want to remove the current crontab file of the current user, type the following command:

This is the same as -r,  however, it prompts the user with a yes/no option before removing the crontab:

If you want to display the contents of the crontab file you are currently logged in, type the following command in the terminal:

Another operation allows you to see if there are any crontab files created. You can simply type crontab -l. If you don’t have any, you will see this result.

In addition, if you want to see the crontab file lists of other users, you can type crontab -u username -l  as a superuser.

Apart from knowing the basic operations, it is important to learn the basic syntax too.

Basically, a crontab file consists of two parts: the schedule timer and the command.  This is how the command is written:

Let’s get into some extra detail.

How to Write Cron Syntax Properly

As previously mentioned, a crontab file has five fields – each field is represented by an asterisk – to determine the date and time of a certain task set to perform repeatedly.

Adding to that, you need to use the proper characters in each crontab file.

Now that you have learned how to write cron syntax properly, we will give you more examples to help you understand the rules stated above better.

Before moving on, keep in mind that the output of the command will be automatically sent to your local email account. So, if you want to stop receiving these emails, you can add >/dev/null 2>&1 to the syntax as in the following example:

If you want to send the email output to a specific account, then you can add MAILTO followed by the email address. Here is an example:

Two files play an important role when it comes to cron jobs.

What is a Cron Job?

Cron is a utility program for repeating tasks at a later time. Giving a command that schedules a task, at a specific time, repeatedly is a cron job.

If you want to schedule a one time job, for a later time, you might want to use another command. But, for recurring jobs, cron is the perfect solution.

Cron is a daemon, meaning that it works in the background to execute non-interactive jobs. In Windows, you might be familiar with the background processes such as Services.

A daemon is always in the idle state and waits to see if a command requests it to perform a certain task — either within the computer or from any other computers on the network.

A cron file is a simple text file that contains commands to run at a specific time. The default system crontab file is /etc/crontab and is located within a crontab directory, /etc/cron.*/. Only system administrators can edit the system crontab file.

However, as Unix-like operating systems support multiple users, each one can also create their own crontab file and launch commands to perform jobs anytime they want. A cron daemon will check the file and run the command on the system background.

With cron jobs, you can automate system maintenance, disk space monitoring, and schedule backups. Because of its nature, cron jobs are great for a computer that works 24/7 — a server.

Please note that while cron jobs are mostly used by system administrators, it can be incredibly useful for web developers too. For example, use cron to deactivate expired accounts, check broken links, or even send newsletters for targeted users.

Setting up an automatically scheduled job will not only be practical but will also help prevent you from possibly missing the action on time.

Cron job is a great way to manage such tasks either as a system administrator or other professions like a web developer. All you need to do is to use the right command and choose the right time.

Here are some of the basic commands:

Now try and let the automation work for you any time you prefer.

Suryadi, an avid content writer with years of IT experience, keeps on pursuing opportunities to engage with more people through articles about WordPress and other issues. During his free time, he enjoys playing Clash Royale.

Hey there Faraz! :) I think you've landed on the wrong article, but no worries, I got you covered! The error you are facing can happen due to few reasons, most common which is the file_upload_size. WPBeginner have a great guide on this - you can check it here. Meanwhile - you can check how to increase the upload size in this amazing guide we have here on our own website! :) Let me know how it goes!

Are cron schedules made in cPanel relative to European time?

Hey Hannah. All server time events are in GMT time.

How to Install SSL Certificate on CentOS 7