CentOS vs Ubuntu – Which One to Choose for Your Web Server 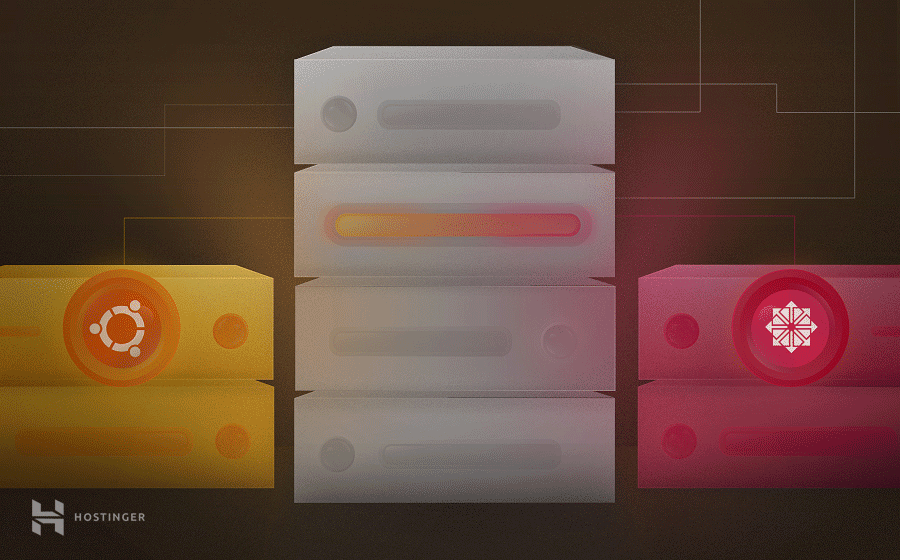 In this CentOS vs Ubuntu comparison, we will aim to overview the key features of both Linux distributions, which will help you pick the right operating system for your VPS.

Choosing an OS for your server can be a really confusing task due to a huge list of available options; especially if you want to go with a Linux distribution. There are many choices, but none of them are as famous as Ubuntu or CentOS.

It doesn’t matter whether you are a professional or a beginner, it usually comes down to choosing between the two options. It’s safe to say that there is no straightforward decision. In this article, we intend to compare CentOS vs Ubuntu with the aim to figure out which one could be the best fit while setting up a server.

Before we begin shedding light on the differences between the two well-matched opponents, let’s first look at brief overviews.

CentOS is an open-source Linux distribution. Many refer to it as a replica of the Red Hat Enterprise Linux (RHEL), which is considered to be the most widely used in the corporate IT world. CentOS is an enterprise class operating system supported by the community and released back in 2004.

Close similarity to RHEL gives you the luxury to develop in a dominant and one of the best Linux distribution out there. One might say that this already gives CentOS a lead over Ubuntu.

It’s highly customizable, secure, and stable, which is also something to appreciate it for. The close link to RHEL allowed CentOS to have quite a few corporate-level security updates thus making it a safe choice for every user.

Based on the Debian architecture, Ubuntu has been a hot favorite for personal and professional use since its initial release in 2004. It is open-source and gets frequent updates to remove any identified bugs. It is laden with a rich set of package groups and features that are capable of meeting the requirements of any project.

Ubuntu comes with a ton of apps. The Ubuntu software center has over 40,000 applications available! Moreover, the operating system is highly customizable and has top-notch security features.

Now then, let’s take a look at the differences between Ubuntu and CentOS:

This does not mean that Ubuntu is unstable or not secure; it’s just slightly less stable compared to its counterpart.

The aforementioned are the main differences between the two of the best Linux distributions and it’s not safe to choose one as the ultimate for every user. Picking the right operating system will require a close evaluation of the pros and cons of the two and an analysis of the requirements and desires of the user. With that said, here are our recommendations:

To conclude this CentOS vs Ubuntu comparison, both are famous and one of the best Linux distributions that come with their own set of pros and cons. Choosing one is an easy task if you consider your requirements and are ready to do certain trade-offs. The objective of this article was to provide a comprehensive overview of the differences between these two Linux distributions to ease the decision-making process. If you use Hostinger, you can give both of them a test drive, as you can re-install operating system of a VPS in just a few clicks!

I'm usually a bigger fan of Ubuntu, but it seems that CentOS is a really powerful distro too. It's so hard to decide... :( Overall, nice overview. Thank you!

It awesome to hear that you found this guide useful! If you can't decide which operating system is best suited for your web server, you can give both of them a try. Here on Hostinger, you can re-install the OS of your virtual server with just a few click in the control panel ;)

Will I get root privileges if I order a VPS from Hostinger?

Sure! Root access is available with all VPS hosting plans :)

Gediminas -- A succinctly written article for a Linux newbie like me. I use CentOS at work and wanted to try to make my own server. This article convinced me to use Ubuntu for home since I want to double the server as a media center. Since Ubuntu is more widely used, I have a wider selection of software I can use, while not necessarily requiring the advanced server features that CentOS offers. Keep up the good work!

From a professional point of view, CentOS has always been the prime distro as a server. Especially for Web (Full Stack PHP/MySQL, etc) and VoIP Running Asterisk. It's more stable, more secure and specifically designed to be a server. With UBUNTU, there's just too much junk and many times unstable. I also find CentOS to run much faster as well as a server.

Thank you for your comment. It helped me to choose centos as servers for my client companies.

Really great comparison, THANK YOU! Been a CentOS geek for years but now curious about Ubuntu. Thanks for helping me keep an open mind!

Good one mate! Thanks for all the handy info. (Y)

Hey Gediminas, thanks for that short overview and your perspective. As a server admin and IT pro i'd like to add an pro for CentOS (you might want to include it as a short side-note). Because CentOS is Based on RHEL it is the cheaper go for any server hardware because it is way more likely to get specific manufacturer support. All these manufacturer develop support upon RHEL and so can be used with CentOS. All the best, Chris

basically: ubuntu is worthless. for servers debian, for desktops mint - but never ubuntu.

A case that forces me to choose Ubuntu over CentOS: the newest git on CentOS is still 1.8.3.1 despite that the epel and extras repos are both enabled, which is decade old. GitLab runner just can't use this version of git to perform CI tasks. On the other hand, the newest git on Ubuntu is 2.25.x, which works perfectly for GitLab runners.

Another case against CentOS: the epel managed PostgreSQL 12 on CentOS has an unusual directory structure when installed, making installing plugins a huge pain if eventually works.

We have used Centos VPS hosting for many years along with cPanel for management. Last year (2019) cPanel dramatically increased the licensing costs and as of now (Aug 2020) does not support Centos 8. Centos is still my preferred OS for hosting, but don't want to invest in Centos 7 with cPanel and a short EOL, then in a few years have to upgrade to Centos 8. cPanel will give me platform migration tools which are great and will save a ton of time, but I'm caught now as to whether to stick with Centos or look at alternatives.