Hostinger is now accepting cryptocurrencies as a form of payment in exchange for its web hosting services.

Hostinger decided to accept most cryptocurrencies in exchange for the world’s best web hosting solutions in December 2017. It aligns with Hostinger’s company vision of empowering millions worldwide with the power of the Internet by providing them with the tools to learn, create, and grow online.

According to Hostinger’s Head of Product, Giedrius Zakaitis, Hostinger decided based on economic factors.

He stressed that Hostinger does not wish to exclude web developers who are too young or unable to gain access to a FIAT currency bank account or credit card from purchasing its web hosting services.

“There are millions of young web developers and people with great ideas around the world, but they do not have a bank account due to their age or other restrictions,” Giedrius explained.

“The last thing we want is for a talent with a great idea for the Internet to give up on it just because they do not have the chance to pay for the tools that will make it happen.” – Hostinger

“Hostinger has constantly been looking for solutions to resolve that issue. We are happy to have found a way to do it by joining the cryptocurrency revolution and accepting most cryptocurrencies as a form of payment.”

There’re many reasons why you should use bitcoin for hosting purchases. Complete authority over your money, lower transfer fees, and no bank account, to name a few. Hostinger also believes that by paying with cryptocurrencies, customers’ finances are at a much lower risk of fraud than if they were paid for with a standard credit card.

Improvements have been made in credit card security in recent years. However, extracting personal information and finances from a credit card is still easier than removing personal data from a transaction made with a cryptocurrency on the decentralized blockchain server.

“Credit cards are broken by design because the token itself is the secret key,” said Greek-British Bitcoin advocate Andreas Antonopoulis, when explaining the security benefits of cryptocurrencies. “If you transmit that token, you expose your entire account to risk.

“Bitcoin is fundamentally different. What I’m transmitting is not the key but simply a signed message. It is an authorization. And that authorization has two external references: one, to where the money’s coming from by referencing an unspent output on the blockchain, and one reference to where I want to send the money.

“By creating a new encumbrance, a new limitation on who can spend the money, usually a public key or Bitcoin address. And that transaction contains no sensitive data.”

Moreover, the acceptance of cryptocurrencies aligns with Hostinger’s idea of making its web services available to everyone irrespective of their financial circumstances.

Cryptocurrencies work on the blockchain, which is a decentralized network of servers. Therefore the need for a ‘middleman’ is removed when making a transaction from Point A to Point B.

Hence, unlike when making a payment with a FIAT currency, expensive transaction fees are taken away because the middleman (in this case, the bank responsible for the FIAT transaction) is no longer needed.

Have you paid for your Hostinger services using cryptocurrencies? How was your experience, and what feedback do you have for us? Let us know! 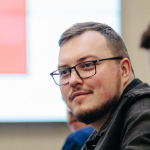 Do you acept orme and omc?

Hey there! Thanks for the question. At the moment, we accept these cryptocurrencies: Bitcoin, Ethereum, and Litecoin. You can find all the existing payment methods right here.