As a concept, freelancing refers to hiring temporary workers, such as copywriters, graphic designers, online tutors, and web developers.  But not only in the IT sector. It also entails everyone from pop-up baristas and language tutors to drivers for one of the many travel apps available.

No wonder freelancing has become a primary source of income for many people as they enjoy the independence of the freelance economy.

In 2022, freelancing can mean any sort of work that goes against the traditional 9-5 structures. Covid-19 and the worry of impending recessions, to name a few global anxieties, have contributed to the current freelance climate. As a result, many flexible jobs and side hustle opportunities that seemed implausible even a decade ago have emerged.

The Bureau of Labor Statistics research showed that the percentage of people quitting their job rose from 1.6 % in April 2020 to 6.4 % in August 2021. The most significant shift is that many people are not moving onto a new payroll company but leaving for freelance independence.

With doors open to working in co-spaces, allowing networking and sharing ideas, many people get more creative. Furthermore, young people understand they may not be able to afford a mortgage, opting for work that frees them to travel and see the world.

And so the pull for freelance makes sense; choosing one’s hours, working spaces, and clients.

Success stories such as running a boutique gym or finding a flair in design have opened doors for many niche ideas to come alive. The latter is possible through people creating their own websites to promote their businesses or hiring a web designer and keeping the freelance economy turning.

It might sound pretty simple, but the necessity of the internet in everyday life is the driving force behind freelance work culture. Remote working impacts this heavily; “In the United States alone, more than 4.7 million people work remotely at least half the time in the United States. 44% of companies do not allow remote work, and 16% of companies hire remote only workers.”

Without guaranteeing a stable and secure job as it was once known, many began to loom inwards at their knowledge base and how they could apply it.

Why Is the Freelance Economy Flourishing?

The development of technology, in particular, the use of apps to buy and sell goods online as well as connect customers with freelancers worldwide, has enabled more individuals to pursue their passions outside regular working hours.

Covid-19 has blurred the lines at work and helped people be more prone and start doing business online.

In many traditional workplaces, flexible work is available for at least a day or two per week. It is becoming the norm. As a result, companies uncompromising in this are deemed unattractive to prospective employees.

The eCommerce industry statistics prove that the industry is booming. Let’s go into more detail:

In the past five years, the phrase side hustle rose from 11% to 75%, freelancing from 20% to 82%, and passive income from 28% to 75%. This Google Trends data represents search interest relative to the highest point on the chart for the given region and time.

(A value of 100 is the peak popularity for the term. A value of 50 means that the word is half as popular. A score of 0 means there was not enough data for this term)

Why Freelancing Is The Future

Recessions and global pandemics aside, the future of freelancing feels full of promise. There is constant growth in co-working spaces, with more nuanced professions, such as bespoke PR and creative web design. There is a distrust in the air with employee engagement down with more than 600 US businesses with 50-500 employees; 63.3% of companies say retaining employees is more demanding than hiring them.

News travels fast; in the younger generations, the feeling that there are possibilities lying outside the traditional workplace has spurred the freelance movement forward.

According to McKinsey, 500 million freelancers will be working through platforms to make money online before 2030. Not only is becoming freelance a way to be completely independent with your time, resources, and skills, but these statistics show a healthy marketplace growing each year. 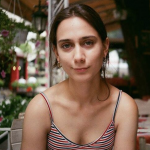 Florence is a writer from Yorkshire, UK (by way of Berlin) who loves films, music, and all the rest. Plus being from Yorkshire she knows how to make a real brew.

In our latest Hostinger Academy podcast, we speak to the Executive Director of the WordPress project Josepha Haden Chomphosy about how careful and conscious community building is …